From SCECpedia
(Redirected from BBP)
Jump to navigationJump to search 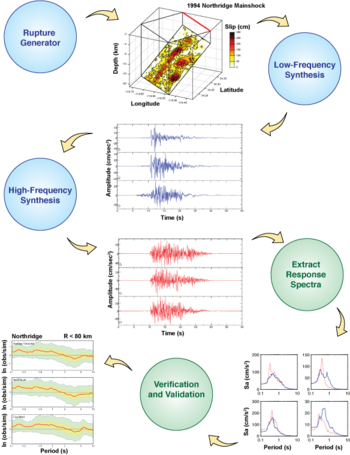 The current release of the SCEC Broadband Platform software is available for download from:

This version was released in May 2022. BBP v22.4 includes several new capabilities. Details of the new features and capabilities of BBP v22.4 are described in the BBP v22.4 release notes. We recommend that all new users work with BBP v22.4 because this version adds new capabilities and improvements to the methods provided in earlier releases of the Broadband Platform. We recommend existing Broadband platform users migrate to BBP v22.4 whenever possible. Previous versions of the Broadband Platform will remain available for users that want to reproduce results produced with earlier versions of the Platform. Please review the BBP installation instructions for details on how to download and install BBP v22.4 on your local computer.

Users may calculate broadband seismograms for both historical earthquakes (validation events including Northridge, Loma Prieta, etc.) and user-defined earthquakes. The platform produces a variety of data products, including broadband seismograms, rupture visualizations, and several goodness-of-fit plots. When running a validation event, users supply their own simple source description, or provide a rupture description in SRF format. Users may specify their own list of stations or use a provided list.

The Broadband Platform is open-source software that is made available under the terms of the BSD-3 License. A copy of the License can be found with the software in the 'LICENSE' file in the GitHub repository.

For assistance with the Broadband Platform, you may

Earlier version of the broadband platform software and data distributions are provided to support existing Broadband platform users. However, we recommend all users upgrade to the most recent version at first opportunity. Earlier releases can be found in the Broadband Platform Previous Releases page.

Please support the Broadband Platform project by acknowledging the use of this software in your presentations and publications. Acknowledgements and citations help us obtain additional resources for continued development of the platform. If you use the Broadband Platform software for work resulting in an academic publication, we would appreciate it if one, or more, of the following paper is cited.

The primary reference for the Broadband Platform software system is:

The site response method written by RWGraves, included in the BBP, is based on this reference: