The SCEC Community Velocity Model - Harvard (CVM-H) is a velocity model of crust and upper mantle structure in southern California developed by the SCEC community for use in fault systems analysis, strong ground motion prediction, and earthquake hazards assessment. 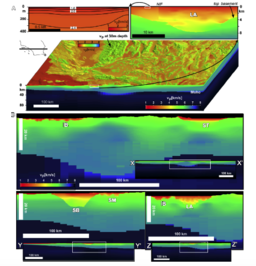 Perspective view of the northern part of CVM-H v15.1.0, showing an enlarged transect across the Los Angeles basin. An enlarged view of the shallow velocity structure in the basin shows the Geotechnical Layer (GTL), as described in the text. B) Cross sections showing Vp across the USR. LA is Los Angeles basin; SB is Santa Barbara basin; IB is Inner Borderland; ST is Salton Trough basin (Shaw et al., 2015) 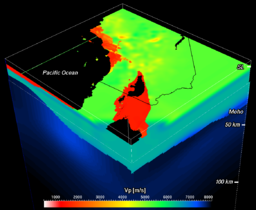 The latest version of the SCEC Community Velocity Model (CVM-H 15.1.0) includes basin structures embedded in the 3D waveform inversion model of Tape et al. (2009), and an explicit representation of the Moho (after Yan and Clayton, 2007; Chulick and Mooney, 2002), and an optional arbitrary-precision Vs30-derived geotechnical layer for the top 350m (Ely et al 2011).

The SCEC CVM-H velocity model describes seismic P- and S-wave velocities and densities, and is comprised of basin structures embedded in tomographic and teleseismic crust and upper mantle models. This latest release of the CVM-H (15.1.0) represents the integration of various model components, including fully 3D waveform tomographic results. We recommend use of the most recent version of CVM-H, in most cases.

Improvements in version 15.1.0 include revisions to the basement surface that include the localization and displacements of faults in the Santa Maria Basin. This affects the boundary between the sediment and basement velocity parameterizations.

Previous improvements that appeared in version 11.9, and also appear in 15.1.0, include a newly compiled Moho surface, opening up the offshore Santa Maria basin to the western model margin, a detailed representation of the San Bernardino basin, a much smoother transition between low resolution area and high resolution area at its southern border in the Los Angeles region and removal of various small near surface artifacts. The new Moho surface was compiled by Tape et al. from a large number of data sources, including global data sets, receiver functions and local studies. In replacing this surface care was taken that the depth interval around the Moho level both in the mantle and in the crustal portions of the model which were affected by this change, were assigned the correct domain, and consequently assigned velocities extrapolated from the underlying mantle model or from the crustal background model. In the offshore Santa Maria basin we extended the definition of the basement surface using reflection seismic data (McIntosh et al., 1991) to the very western margin of the model and to the north in order to remove an abrupt transition from the basin to background. We smoothly extrapolated sediment velocities from the onshore model into this new basinal area. Another basin, the relatively small San Bernardino basin, is now represented in the model. The basement surface is based on gravity data (Anderson, 2000) and seismic reflection data (Stephenson et al., 2004). To the west the basin is connected by a thin veneer of sediments to the Los Angeles basin whereas to the ESE the basin is represented as tapering out as is the case in other such basin representation. The ESE is the deepest part of the basin, and the data do not preclude a continuation of the basin in this direction. The Vp velocity structure in the basin is defined by stacking velocities (Stephenson et al., 2004) and a 1D velocity profile (Graves, 2004). Vs is derived from Vp using Brocher (2004). Finally, we removed a discontinuity in the velocity structure between the southern margin of the high resolution model in the Los Angeles area and the surrounding low resolution model. We modified the high resolution area by introducing a smooth N-S gradient in the delta between the low and high resolution models in a region at its southern margin.

The CVM-H 15.1.0 consists of basin structures defined using high-quality industry seismic reflection profiles and tens of thousands of direct velocity measurements from boreholes (Plesch et al., 2009; Süss and Shaw, 2003). The basin structures are also compatible with the locations and displacements of major faults represented in the SCEC Community Fault Model (CFM) (Plesch et al., 2007). These basin structures were used to develop travel time tomographic models of the crust (after Hauksson, 2000) extending to a depth of 35 km, and upper mantle teleseismic and surface wave models extending to a depth of 300 km (Prindle and Tanimoto, 2006). These various model components were integrated and used to perform a series of 3D adjoint tomographic inversions that highlight areas of the model that were responsible for mismatches between observed and synthetic waveforms (Tape et al, 2009). Sixteen tomographic iterations, requiring 6800 wavefield simulations, yielded perturbations to the starting model that have been incorporated in the latest model release. CVM-H 15.1.0 also incorporates a new Moho surface (Yan and Clayton, 2007) and an upgraded geotechnical layer (GTL) based on a Vs30 map (Ely 2010), the Vp-density scaling relationship, and the code that delivers the model.

Version 15.1.0 includes revisions to the basement surface that include the localization and displacements of faults in the on-shore Santa Maria Basin. This affects the boundary between the sediment and basement velocity parameterizations.

Version 11.9.1 represents an improvement on 11.9.0 and it is recommended that all users upgrade to this new version. Specifically, the latest iteration includes the following changes to the high resolution (HR) data set:

The following software is required to build and run CVM-H.

To install and use the CVM-H, you need to download and build the CVM-H software distribution. There are detailed installation instructions on the CVM-H User Guide. The main steps involved in installing CVM-H include:

Please note that, depending on your version of Linux or OS X, some additional steps may be required. If you run into the following error:

These posters and presentations may contain information about earlier versions of CVM-H. This information may be useful to some users.

For assistance with the SCEC CVM-H, you may:

The CVM-H releases contain cumulative improvements to the geological models and software interfaces. We recommend using the most recent version of the software, in most cases.

The CVM-H User Guide contains a comprehensive version history for CVM-H that is more complete than this summary including scientific references for each version.

Please Note: These distributions are "old" version of CVM-H. We strongly recommend you use the latest version of CVM-H posted above. These versions are only distributed to support projects that used them in the past.

For the CVM-H 11.2.0 release, our CVM evaluation system was used to evaluate three different CVM's for southern California, the current release and two alternative, or earlier, SCEC CVM's.

These distributions are available for download from the table below:

Please Note: These distributions are "old" version of CVM-S. We strongly recommend you use the latest version of CVM-S posted on the CVM-S page. These versions are only distributed to support projects that used them in the past.

The vx_api library has a bug in query by depth mode. The structure member vx_entry_t.coord[2] (z value) gets altered during a vx_getcoord() call from depth to elevation when querying below the GTL. This value should not be changed during the call. The work-around for this issue is to make a copy of the depth value before the call to vx_getcoord() if you wish to use that depth later. The vx_lite command line tool does not exhibit this bug. This issue will be fixed in the next release. See the online user guide CVM-H User Guide for an example that employs the work-around.

If you're interested in working with the latest development version of the platform, you can check it out from:

Details about working with the development version are provided in the User Guide.