Hazard maps from Study 15.12 are posted:

Intensity measures and curves from this study are available both on the CyberShake database at focal.usc.edu, and via an SQLite database at /home/scec-04/tera3d/CyberShake/sqlite_studies/study_15_12/study_15_12.sqlite .

We are working on doing a series of broadband CyberShake runs, extending the 1 Hz deterministic results we generated in the spring with stochastic results from high-frequency implementation on the BBP.

Before we setup the calculation, we evaluate questions about the 1D velocity model needed for the high frequency results. It seems like there are three ways we could handle this in the context of CyberShake:

There are specific details here and it has to do with the way site-response is handled for the high frequencies.

The current BBP is set-up for computing ground motions at a "hard-rock" site, typically Vs30=865 m/s. (The reason behind this seemingly random value is that the site-response module in GP2010 used the Campbell-Bozorgnia amplification factors, which are linear functions for Vs30 >= 865 m/s.)

To compute the high-frequency motions for sites with Vs30 < 865 m/s, it is not as straightforward as simply replacing the prescribed 1D velocity structure with something that has lower velocities in the near surface. The problem is that the HF simulation codes on the BBP do not model non-linear behavior. GP2010 addressed this by using a post-processing step that applied empirically-based, frequency-dependent, non-linear amplification factors to adjust the computed rock-site motions to a (presumably lower) site-specific Vs30 value. The codes to do this are in the BBP source code distribution("wcc_siteamp"). However, they were not used for any of the validation exercises since those were all hard-rock based, and the BBP scripts probably have had any references to these codes deleted or commented out.

Our Proposed method on how to proceed for CyberShake is as follows:

(with Vs30=865 m/s) that is already on the BBP is the current preferred choice.

We confirmed the version of CVM-S4.26 used for CyberShake Study 15.4 does include the GTL, with a 500 m/s minimum cutoff. It sounds like it would be better to extract Vs30 values from it rather than Wills. Should we apply the 500 m/s cutoff to the Vs30 values we pass to site response like we did with CyberShake, or use them as-is?

Site response module: wcc_siteamp. The current version of the code uses site amplification factors based on the 2014 NGA GMPEs. Check to see if that is on the BBP. This version is not formally validated this version (e.g. by redoing the GP2010 validations).Need to make sure to run some compatibility checks just to make sure the results looked OK.

Apply the modification to all sites without worrying about the specific Vs30. For sites that have Vs30 greater than about 600-700 the modification will be very minor. But the extra overhead in running the code for all sites is probably insignificant relative to the (equally trivial) overhead in checking the sites for an arbitrary Vs30 threshold and having different processing streams based on this.

There are some concerns about the near-surface velocity values in the CVM used for the previous calcualtions, in particular, very high Vs for rock sites, and that is why we used Wills In CVM-S4.26, does it include the "geotechnical layer"? If so, then its probably best to use these values, so that the LF and HF portions are consistent.

The input and output are the same as previous versions with the possible exception being the parameter "model". If "model" is not specified, then the default settings are used, which is fine.

Check to see if this parameter was set previously. (i.e., as model=<something> either in a parfile or on the command line)

Regarding the question of whether we should we apply the 500 m/s cutoff to the Vs30 values we pass to site response like we did with CyberShake, or use them as-is? Current decision is to use them as is. There will be an apparent disconnect with the 500 m/s cutoff at some sites, although the the 500 m/s value with a 100 meter grid spacing is an adequate approximation for the LF calculation.

Broadband-Cybershake motions for a few sites combining the stochastic and Cybershake signals: 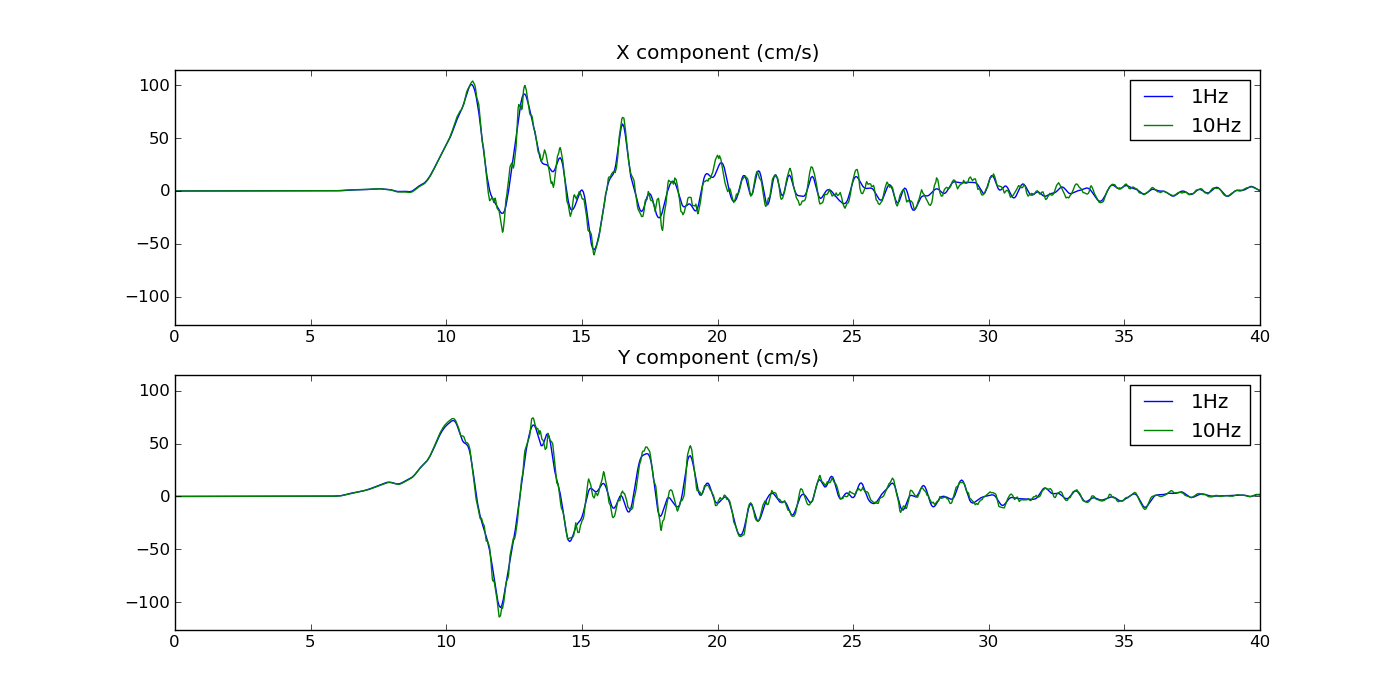 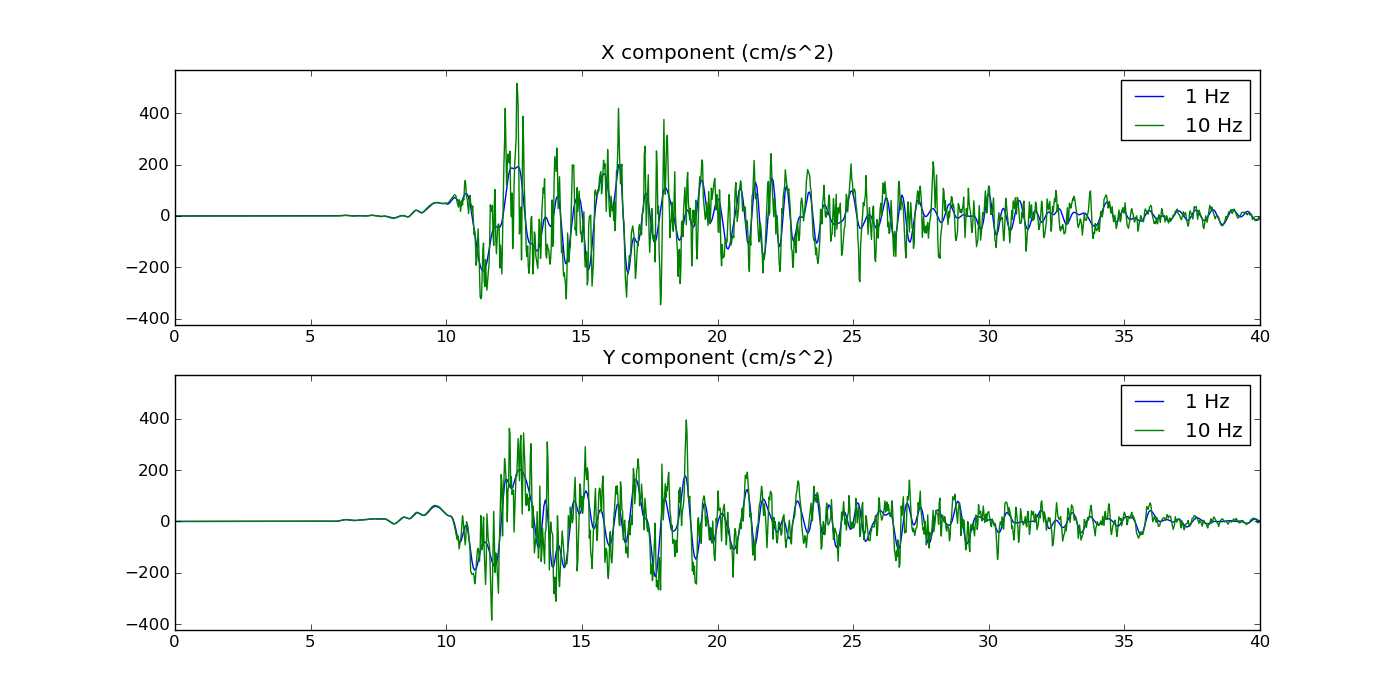 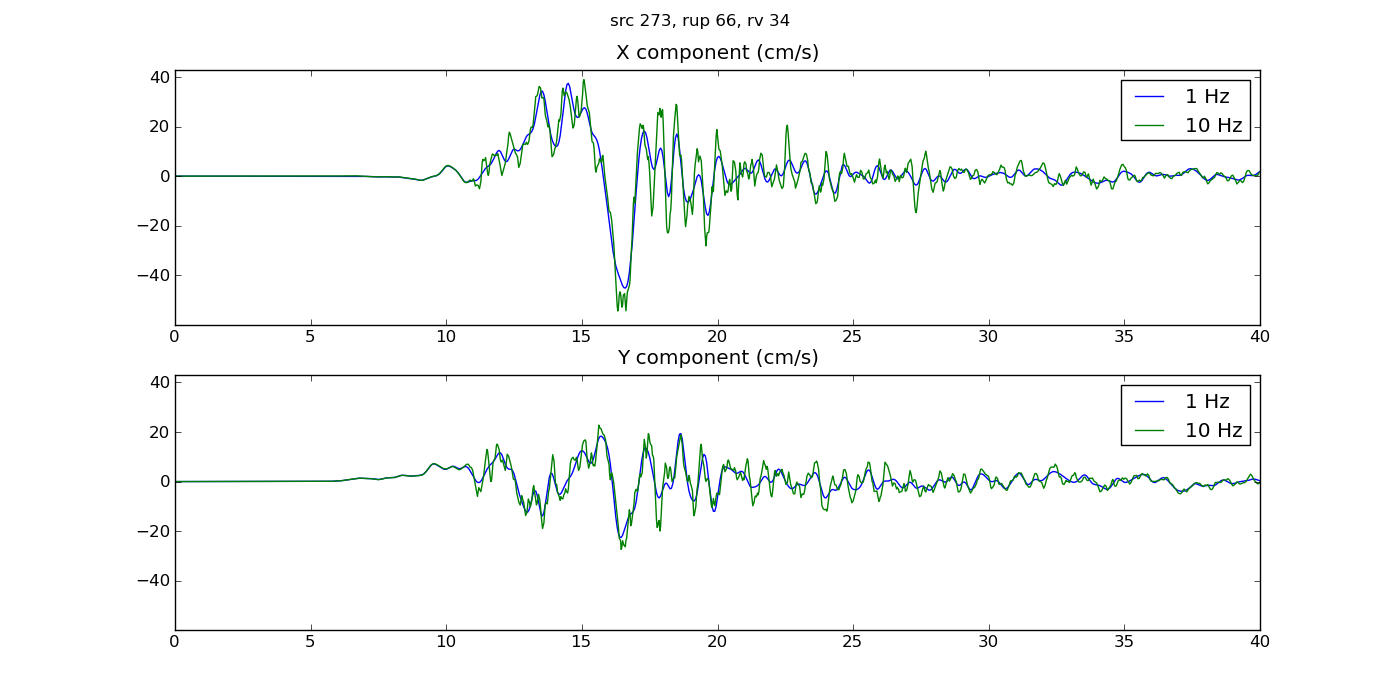 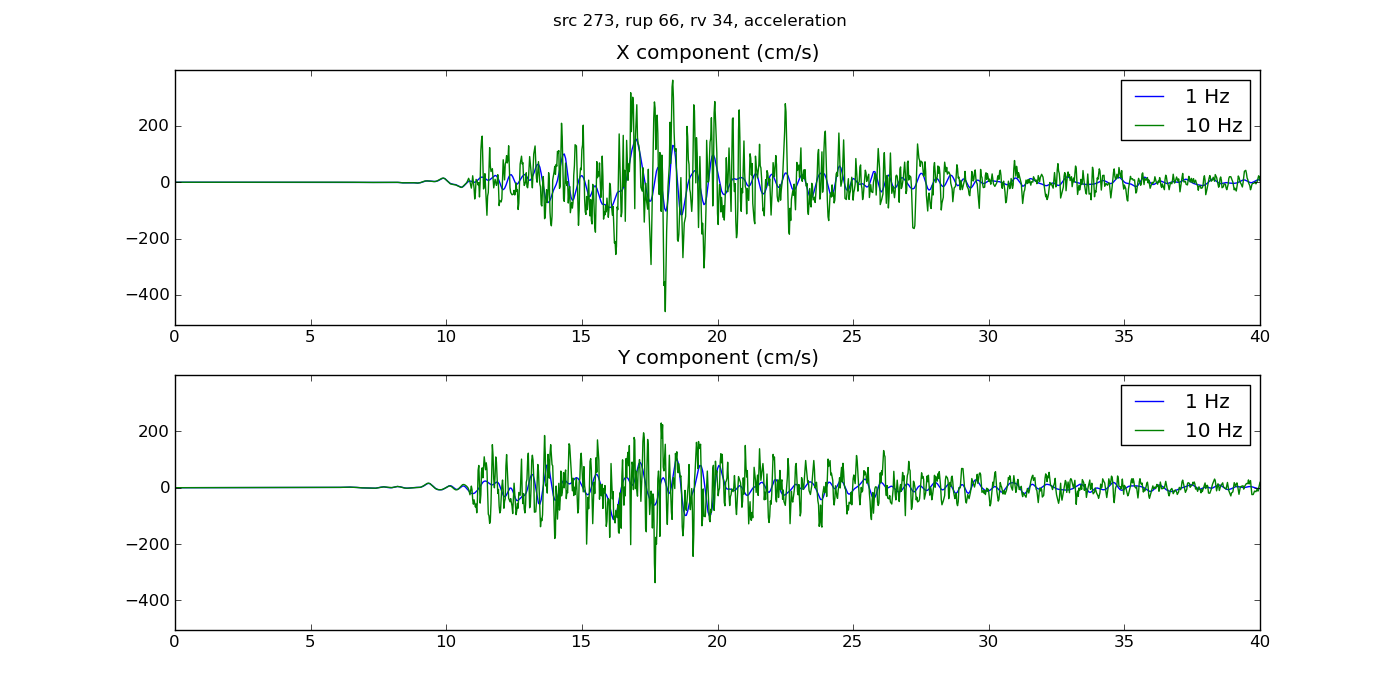 Here is a comparison of the spectral response results for the two above events, for the 10 Hz run. 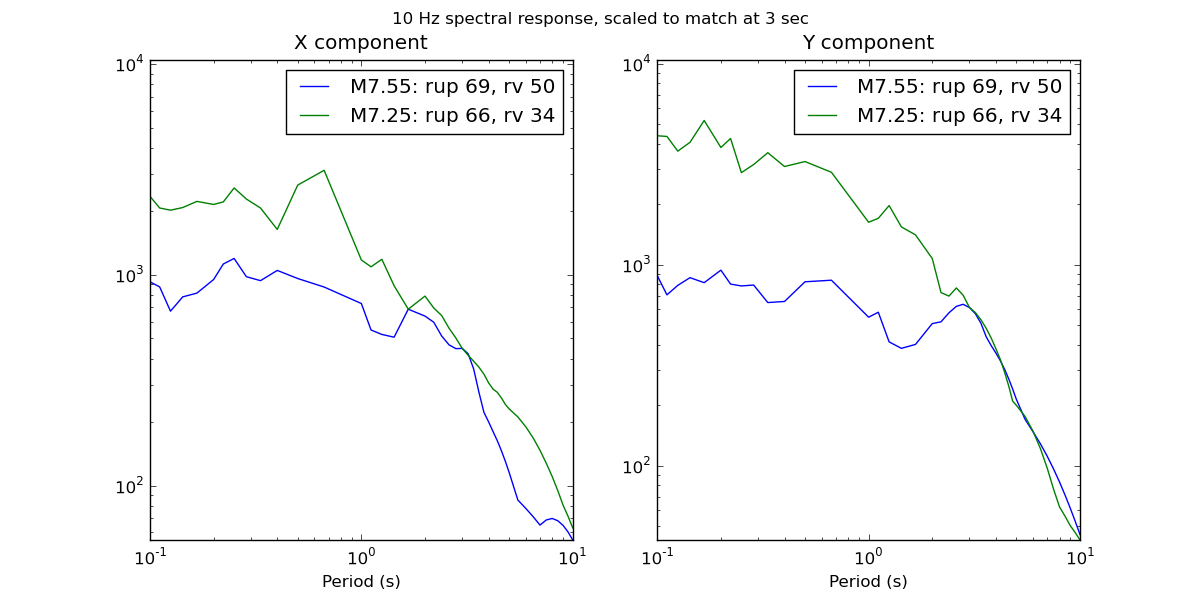 Here are comparison curves for PAS and LADT.

We modified the vref calculation further, to:

with Vs30 determined from the CVM as before (averaging over 1 meter increments). The other parameters are determined based on the grid spacing used in the calculation, given by H:

And then VsD5H is given by: