SCEC Geoinformatics Group plans to have two telecoms a month during the Spring 2014 semester.

On our Geoinformatics project, we are working towards several goals including:

We have selected the following Dates/Time for our calls. These call times were selected to avoid schedule conflicts with Tom’s teaching schedule. We apologize if these times conflict with your Spring 2014 commitments.

All calls are scheduled from 11am-12noon Pacific Time

These 7 calls will take us through end of the USC Spring Semester. We will select a summer call schedule once summer schedules are available.

The goal of these calls is to increase communications and collaborations among our widely distributed project groups. We will send a reminder just prior to the call. Please plan to join us for our next call:

Summary. Precise information about the structure of the solid Earth comes from seismograms recorded at the surface of a highly heterogeneous lithosphere. Full-3D tomography based on adjoint and scattering-integral methods can assimilate this information into three-dimensional models of elastic and anelastic structure. These methods fully account for the physics of wave excitation, propagation, and interaction by numerically solving the inhomogeneous equations of motion for a heterogeneous anelastic solid. Full-3D tomography using adjoint and scattering-integral methods requires the execution of complex computational procedures that challenge the most advanced high-performance computing (HPC) systems. Current research is petascale; future research will require exascale capabilities.

We propose to establish an interoperable set of community computational platforms—vertically integrated systems of hardware, software, and wetware that will allow a significant community of investigators to employ the techniques of full-3D tomography to refine Earth structures. Two tomographic platforms will be built on highly scalable codes for solving the forward problem: the AWP-ODC 4th-order, staggered-grid, finite-difference code, which has been widely used for regional earthquake simulation and physics-based seismic hazard analysis (development led by K. Olsen), and the SPECFEM3D spectral element code, which is capable of modeling wave propagation through aspherical structures of essentially arbitrary complexity on scales ranging from local to global (development led by J. Tromp). A third platform, based on the Unified Community Velocity Model (UCVM) software developed by the Southern California Earthquake Center (SCEC), will provide a common framework for comparing and synthesizing Earth models and delivering model products to a wide community of geoscientists. These platforms will be deployed at the NCAR-Wyoming Supercomputing Center (NWSC). This proposal will be matched with allocation requests for use of Yellowstone at NWSC, to be submitted to NSF in March, 2012. The development and optimization of codes for Yellowstone and NWSC's next generation many-core hybrid systems will be led by Y. Cui.

Intellectual Merit. This two-year project will support the sustained use of HPC systems by seismologists to create and refine Earth models at all scales. A specific project objective is to demonstrate the capabilities of full-3D tomography on both the AWP-ODC and SPECFEM3D platforms by creating Community Velocity Models (CVMs) for California that can be used in computing a statewide CyberShake hazard model. We will support on-going SCEC efforts led by two early-career scientists, P. Chen and C. Tape, to refine CVMs using earthquake waveforms and ambient-noise Green functions. We will investigate the iterative convergence of the tomographic models from disparate starting models using the UCVM platform to facilitate model comparisons, and we will work with SCEC groups in assessing the ability of refined CVMs to predict strong ground motions from large regional earthquakes. A second project objective is to move towards adjoint tomography of the entire planet by providing J. Tromp and his international collaborators with enhanced computational and data-management capabilities at NWSC. Our data management plans focus on establishing a well defined and repeatable data life cycle for Earth structure models needed to increase the scientific and engineering value of earthquake simulations.

Broader Impacts. Global 3D models will provide better images of mantle convection and its relationship to crustal tectonics and the geodynamo. Regional 3D models will more precisely constrain the plate- tectonic processes of lithospheric creation, deformation, magmatism, and destruction. Global and regional models will also improve imaging of seismic sources, including damaging earthquakes and nuclear explosions. Under the NSF-supported CyberShake project, SCEC researchers have developed computational pathways for generating physics-based seismic hazard models. The California CVMs derived by full-3D tomography will be the basis for a statewide CyberShake hazard model built upon a new version of the Uniform California Earthquake Rupture Forecast (UCERF3), which is scheduled for release in 2012. Our education plan is centered on using challenging scientific problems of compelling societal importance to engage and train a diverse STEM workforce, beginning at the undergraduate level and continuing through the post-doc level.

On our Geoinformatics project, we are working towards several goals including: 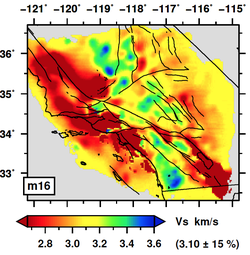 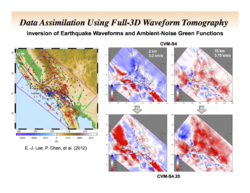