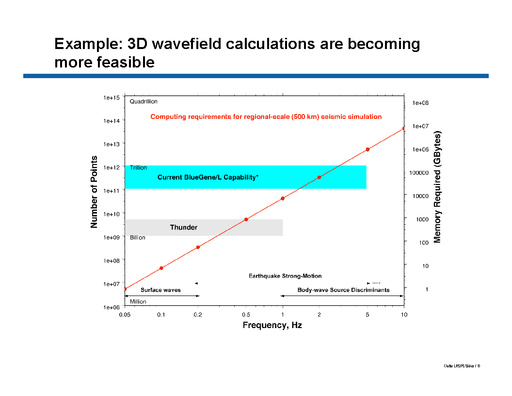 One of the most interesting aspects of the M8 simulation is how it illustrates a veritable “zoology” of complex phenomena that are subjects of active research in earthquake science: tunneling between subshear and supershear rupture velocities, Mach cones, directivity-basin effect coupling, and radiation of a whopping “stopping phase,” to name a few.

To prepare for the presentation of M8 at SC10, I think we should create a timeline that stretches over the first 200 s of the simulation, annotated with descriptions and interpretations of these phenomena. Below is a first draft that I’ve constructed from the various animations of the ground motions, plus the dynamic rupture model as shown in Fig. 19 of the Gordon Bell paper. I have included some questions as well as suggestions for animations/calculations that might enhance the interpretation and the SC10 presentation. However, I don’t have access to an animation of the rupture model. In some cases, my timings may be inaccurate (because I’ve eyeballed the conversion between time and distance along the rupture) and my interpretations may be in error. Therefore, I suggest that we post this timeline on a wiki, so everyone can contribute their thoughts about what is going on. It would really help if we could display several of the movies and an animation of the rupture simultaneously and synchronously.

0 Rupture initiates at the base of the seismogenic zone (16 km depth), beneath the town of Parkfield.

6.5 High-amplitude pulse from supershear rupture reaches the surface, producing a very high PGV. Question: Is this the largest PGV in simulation, or is that from the stopping phase at 138 s?

7-14 A Mach cone from the supershear rupture is evident in the pattern of surface motions.

17-19 Question: Fig. 19 shows rupture velocities of more than twice the S-wave speed (blue color), which implies they are greater than the P-wave speed. Isn’t this physically impossible?

47-58 Question: One can see from the y-velocity movie a pulse that reaches the surface just SE of the epicenter at ~47 s and propagates at very high phase velocity until it merges with the horizontally propagating wavefronts at ~58 s. Is this a spurious S-wave reflection from the base of the model?

48-54 Surface motions show another well-developed Mach cone from supershear rupture along the Mojave section of the SAF. During this period, the S-wave front hits the Santa Clara valley, exciting strong basin modes within its soft sediments. (Issue: Use vector-motion visualizations to show that this is mainly Love-wave excitation.)

50 First strong motions in San Fernando basin. (Issue: Using comparisons with SE-NW source, quantify importance of directivity-basin coupling. We can also use the quantification provided by the CyberShake “red-dot” plots.)

76 First strong motions in San Bernardino basin. (Issues: San Berdoo is the place you don’t want to be during an event like this, because of the extreme directivity-basin coupling. Another good place for using vector-motion viz.)

132-135 Rupture accelerates to supershear, terminating with a big stopping phase that radiates a strong pulse of energy towards the SE, producing the highest (larger than at 6.5 s?) PGV in the simulation.

138 An interesting pattern of wave interference creates strong motions west of the SAF terminus, just NW of the junction between State highways 78 and 86, not far from the southern end of the San Jacinto fault system. (Issues: What is the precise nature of this interference? What magnitude of dynamic stress does it exert on the San Jacinto fault?)

~160 The stopping phase arrives at Mexicali, causing ground motions that would surely be very destructive. (Issue: Mexicali had only a “glancing blow” in El Major-Cucapa. Can we quantify that this would be much worse?)

Many densely populated and economically important areas around the world are seismically active. One such seismically active area is southern California. The southernmost part of the San Andreas Fault crosses this region and it has not produced a major earthquake for more than 300 years. Seismologists believe a large event on this fault is imminent. Seismologists are using computer-based simulations of large possible future earthquakes in order to better understand the seismic hazards in this region. In the earthquake scenario shown here, southern California experiences an earthquake of magnitude 7.8 on the San Andreas Fault. The animation shows seismic waves as they are generated by the fault rupture. The seismic waves can be seen radiating away from the fault into the surrounding areas. Notice the intense shaking emerging in some areas long after the main earthquake has passed. This is due to the complex rupture and wave propagation processes of very large earthquakes like this one. In the scenario shown, the earthquake originates 60 miles south of Palm Springs and propagates mostly in a north-westward direction on the San Andreas Fault. Areas around Palm Springs are severely shaken due to their close proximity to the fault. The simulation then shows seismic waves directed away from the fault and towards the coast along three different paths. One path heads towards Los angles, a second towards ventura and santa barbara, and a third farther north. These wave paths, or so-called wave-guides, are largely caused by deep layers of soft sedimentary materials that trap and amplify the seismic waves. Scienctific simulations of large earthquakes like this one help seismologists, civil engineers, city planners, and the general public to better understand and prepare for the seismic hazard in California. We encourage you to visit ShakeOut.org to learn more about earthquaked preparedness, where ever you live.