This page details the work to migrate the Graves & Pitarka (2019) rupture generator, v5.4.2, to CyberShake.

The work below was performed on Summit.

The verification sequence is:

We generated all 77 rupture variations using the stand-alone code, then generated them using test code compiled against the library. These were all done on a login node.

Only a few non-slip fields differed more than the permitted tolerance, less than 1 per variation.

Since in the past we have had issues with an order dependence in the rupture generator, we also spot-checked by generating every 10th variation using the test code. These yielded the same md5sums as when they were generated in order.

We generated all 256 rupture variations using the stand-alone code, then generated them using test code compiled against the library. These were all done on a login node.

Each rupture variation has approximately 6 differences outside of the tolerance values (out of approximately 2.5 million values).

Since in the past we have had issues with an order dependence in the rupture generator, we also spot-checked by generating every 20th variation using the test code. These yielded the same md5sums as when they were generated in order, as did rupture variations 250 and 251 generated consecutively.

All these SRFs were generated on the compute nodes. If you generate them on a login node, you will get something slightly different.

For this comparison, we recalculated the stand-alone code results using a compute node, since we saw that this introduces some slight differences, and DirectSynth has to be run on a login node.

We compared all 77 rupture variations.

We compared all 256 rupture variations.

Using the slightly higher difference tolerance (0.000021), we average 12 differences higher than the tolerance per variation.

We compared only the first 40 rupture variations.

Using the slightly higher difference tolerance (0.000021), we average 19,700 differences higher than the tolerance per variation.

Since this is quite a bit worse than the previous comparison, we also did a comparison with the results generated directly from the library, and got about the same results.

v5.4.2 is approximately 3x slower than v3.3.1, so we investigated optimization.

We are running source 68, rupture 7, rupture variation 0 as our benchmark. We run it 5 times and take the average.

For source 128, rupture 858 (source 68, rupture 7 produced 42GB trace results), Score-P suggests that gaus_rand() and sfrand() are both called an extraordinary number of times and are responsible for about 75% of the runtime (total runtime was 18.9 sec):

Various optimizations on gaus_rand() and sfrand(), and the -mcpu=power9 compiler flag got us about 1% speedup on source 68, rupture 7.

Running Score-P on a larger rupture (source 63, rupture 3) gives a different breakdown, with more time spent in kfilt_beta2 and fft2d_fftw:

Only about 0.7 sec of the time in fft2d_fftw that's used isn't due to fftw calls, so there's not much potential for optimization.

In kfilt_beta2, about 25% of the time is spent in the if statement which calculates amp. Some refactoring to pull out constants and eliminate as many exp() and log() calls as possible reduced the runtime of this if statement by 75%, yielding an overall improvement of 19%.

and modified it via algebraic manipulation and pulling constants out of the loops:

These optimizations depend on beta=2 and ord=4, so before the for loops I added checks that this is in fact true:

Conclusion: we will use 4 km spacing for CyberShake runs using genslip-v5.4.2. Due to sampling effects (more details below), this value may slightly underestimate the hazard at long return periods (>1e-5)

We performed an experiment in which, for site USC using the Study 15.4 parameters, varied the target_hypo_spacing value from 2.5 km to 5 km in 0.5 km increments, and compared the resulting hazard curves.

The table below shows how many rupture variations were considered for each spacing, and what increase/decrease in post-processing computational cost this represents, compared to the 4.5 km used in the past.

Below are plots of the RotD50 hazard curves for each spacing, using data from this spreadsheet.

We performed disaggregation at 1e-6 for 3 sec RotD50 at the 6 hypocenter spacings.

Their means and medians look quite similar, but we see a higher max for 3.5 and 2.5 km.

I created a histogram of the fraction of rupture variations to fall in each IM bin (for 3 sec RotD50). It does look like we have more representation at the high end with the denser spacings. 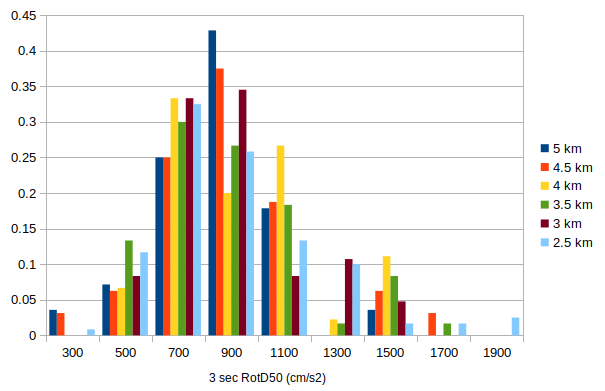 To examine whether the effects seen with different spacings are due to sampling, we ran the post-processing at 5 km 3 more times with different initial seeds, producing 4 different sets of rupture realizations at 5 km spacing. This gives us approximately the same size sample as the 2.5 km spacing. 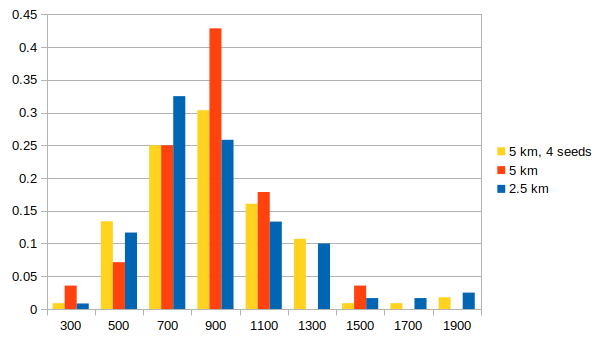