We performed a verification exercise with the CyberShake RotD code. Christine selected 40 station recordings from Hector Mine (data here), and we calculated PGA and PGV by passing very small periods to the RotD50 code.

Full results of our Hector Mine tests are available here. Summary results are presented below:

Since most of the Hector Mine recordings have small amplitudes compared to CyberShake (PGA=0.02g to 0.3g), we also performed comparisons for 2 sites from Northridge (PGA=0.5g and 0.8g). The calculated PGA values exactly matched those provided from PEER for the Northridge sites. Input data is available here. Full results are available here.

In conclusion, the differences in the PGA results are small -- about the same as the differences we see when moving between systems -- and get smaller as the ground motions increase, so they are unlikely to have any meaningful impact on CyberShake curves.

Because the PGV results have such a higher difference than the PGA results, we suspected that the PEER-provided velocity seismograms weren't what PEER used to calculate their PGV. We decided to try integrating the acceleration seismograms ourselves and calculating PGV from those.

This confirms that the RotD code is working correctly, and the issues with PGV agreement are because the PEER PGV values aren't actually calculated from their velocity seismograms.

Based on this work, we will use a period of 1e-4 to obtain CyberShake PGA and PGV using the RotD code.

We discovered that the current impulse used as input to the SGT simulations, which has a tdelay of 1 second (meaning that the peak occurs at t=1 sec), results in artificial truncation of some of the impulse lobes. To correct this, we changed tdelay to 3 seconds in both the impulse generator and the code which populates the SGT headers, so that it is handled correctly during synthesis. This produces more complete impulses, with an integral closer to normalized 1.

Our conclusion is that, while using a CHD similar to that in Jessica Donovan's thesis can result in changes in long-period hazard up to 20%, we will continue to use a uniform distribution when calculating CyberShake curves. If alternative hypocenter distributions are of interest, the probabilities can always be modified after the fact, but at this point we don't have a clear use case for non-uniform CHD other than general interest.

One of the parameters to the rupture generator is rvfrac, indicating what fraction of shear wave speed the rupture velocity is. In past CyberShake runs, we have used a constant 0.8 value for all ruptures. However, varying rvfrac has a big impact on ground motion. Therefore, we investigated the impact of changing rvfrac.

We calculated hazard curves for USC using rvfrac=0.6, 0.7, 0.8, and 0.9. As expected, this has a significant impact on the hazard curves, and the intensity measure distribution:

Here are scatterplots of IM values, showing the impact of successive increases in rvfrac on ground motion.

Additionally, we calculated hazard curves using the combined results from all 4 sets of IMs (so that the probability for each rupture is divided over 4 times as many rupture variations). We compared this to hazard curves created by randomly selected an IM for each rupture variation from the 4 sets of IMs. We sampled 5 random curves, along with the the average of these random samples. 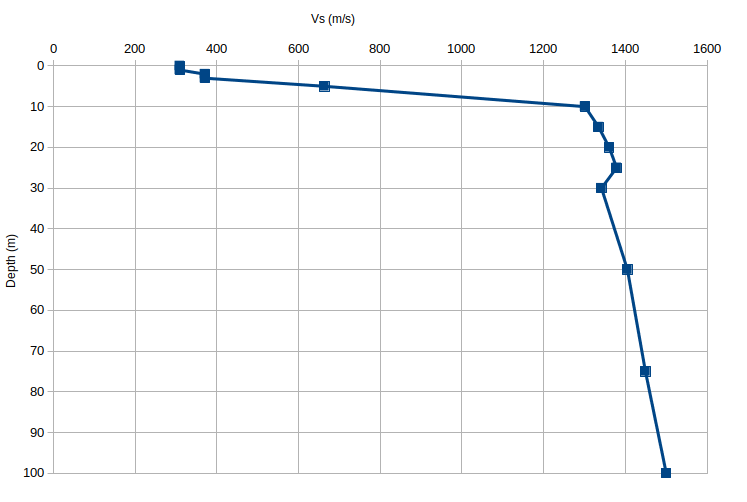 Therefore, we have added the capability of using an arbitrary depth, represented as a fraction of a grid point, when querying UCVM to populate surface mesh points.

Here is a comparison of hazard curves for site USC using z=0 to populate the mesh points (Run 7130, in blue), and z=h/4 (25m) (Run 7133, black). Since we are slightly increasing the velocity of the surface point, we would expect slightly lower hazard, which is what we see.

We will calculate and store the following intensity measures in the database (all PSA values are for 5% damping).

For deterministic seismograms (as simulated):

We will store the following durations in the database for broadband seismograms:

We will calculate deterministic hazard curves at the following frequencies:

We will calculate broadband hazard curves at the following frequencies:

A number of Vs-derived values are used in various parts of the broadband CyberShake code, and we have made some changes in preparation for this study.

In an effort to standardize and be clear with users about where various Vs proxies come from, we decided to define the following values to be stored in the database.

We also identified which Vs values should be used as inputs to the broadband codes.

In the high-frequency site response:

In the low-frequency site response: