M8 simulation input data files and simulation results are posted on this wiki page as they become available. 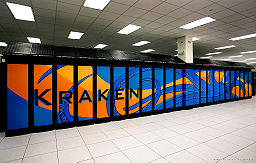 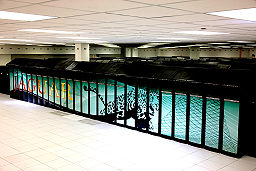 M8 simulated ground motions can be coupled with the mechanics of buildings, tunnels, bridges, pipes, and rails to better constrain how to make such structures more earthquake proof, and to identify hazards and needed warning and monitoring systems. Similarly, they can be coupled to tsunami propagation models to estimate inundation risks.

Increased understanding of geophysical processes at many scales are required to develop more accurate models that can pinpoint hazards within population centers.

It represents the state of the art in simulation scale. The geographical region (~800x400km), the number of mesh points (~450B), the simulated duration (6 minutes), the frequency content of the seismograms (2Hz), the computational scale (~223K cores), the computational duration (24hrs!)... all represent the limits of current capabilities for research of this type.

Recent large earthquake (Sumatra mw9.0 , Chile Mw8.8) make emergency response groups in California to ask how big an earthquake could happen here? What size earthquake is possible for California? Is an M8 possible? Is a M9 possible?

Earthquake magnitude depends on the length and depth of the fault that slips. Large magnitude events occur on large faults. The San Andreas runs through California. The full length extends nearly 1000km, capable of a M9.0. However current geological opinion is that the fault does not rupture end-to-end but northern and southern sections are separated by the creeping section near parkfield.

It's not likely to rupture through this region. So M9.0 are not considered plausible for the San Andreas. However, either north our south segment may be capable of a Magnitude 8.0 earthquake. So, we simulate a M8 on the southern section.

There have been several earlier attempts to simulate M8+ earthquakes in southern California including attempts in movies and television including Earthquake (1974) and 10.5 (2004)

SCEC M8 represents state of the art in physical realism, using two types of simulations, a spontaneous rupture simulation that models the physical principles in friction-based fault rupture processes, together with anelastic wave propagation in full 3d velocity structure with frequencies up to 2hz.

Groups that manage risk information including building inventory and infrastructure deployment use the ground motions to evaluate the estimated losses for such an event based on their current inventories.

We are investigating with our M8 simulations is stress transfer between nearby faults. Can a rupture on one fault load up stress on nearby faults enough to initiate ruptures nearby? If fault loading like this can be shown to occur, it could lead to development of time dependent seismic hazard maps.